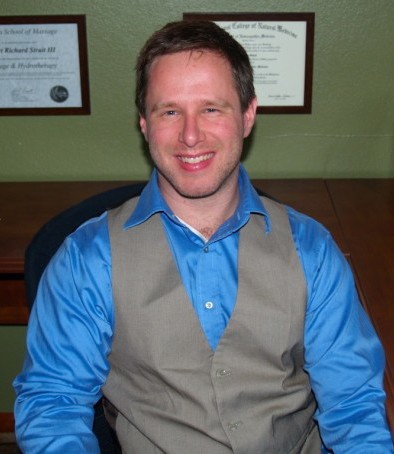 Dr. Robert Strait, N.D. is licensed in Oregon and Washington.

During the last several years I’ve worked with thousands of patients as their HRT doctor and as my HRT clinic’s medical director. I’ve worked passionately and relentlessly to develop unrivaled experience and expertise in testosterone replacement therapy (TRT), human growth hormone (HGH) therapy, comprehensive hormone replacement therapy (HRT), and in the prescription of innovative and revolutionary therapies and protocols to improve sexual and erectile dysfunction for men and women. I’m Portland’s unrivaled HRT and ED expert, and my ultimate goal is to utilize my expertise to help my patients live and perform to their full potential.

Speaking of performance, most recently, after hundreds of hours and about one year of researching, planning, and treating patients, I successfully established Full Potential HRT Clinic’s proprietary POTENCY™ protocol for the treatment of erectile dysfunction, which includes the customized and individualized use of a combination of low-dose daily PDE5 inhibitors, a vacuum-erection device (VED), a POTENTshot™ PRP application, and a series of eight POTENTwave™ low-intensity extracorporeal shockwave therapy for ED applications, all during the course of four weeks. This protocol is made even more effective when performed for a male on testosterone replacement therapy or human growth hormone therapy if these hormones are deficient due to normal aging or other causes. I believe this proprietary protocol is the most exciting and revolutionary innovation in the non-surgical treatment of erectile dysfunction to emerge since the GAINSWave® shockwave therapy for ED protocol during the last two decades. I believe our proprietary POTENCY™ protocol – because of how comprehensive it is – and because more shockwave therapy for ED treatments are performed – outperforms GAINSWave® shockwave therapy for ED in Portland, Oregon – at the same cost as GAINSWave®.

I've successfully treated more than
0 patients
who used to suffer from low testosterone and other hormone deficiencies, and / or sexual or erectile dysfunction.

What Motivated Me to Become an HRT Doctor and Expert?

Erectile dysfunction and sexual dysfunction in men and women is so underreported that it’s difficult to have an accurate estimate of its prevalence, but it’s estimated that it’s almost as common as low testosterone and low hormones, with more than 50% of men over 40 years old, and more than 70% of men over 65 years old suffering from significant erectile dysfunction, and more than 60% of women over 30 years old, and nearly 100% of women over 50 years old suffering from significant sexual dysfunction. Since 2012, I’ve successfully treated more than 1,000 men and women with sexual and erectile dysfunction with about a 90-95% success rate, including many who hadn’t been able to have penetrable intercourse for more than 30 years. It’s important to point out that the primary cause of sexual and erectile dysfunction for men and women is low testosterone and that for women the secondary cause is low estrogen, as a normal part of aging, and that in these cases the safest and most effective and most permanent treatment is properly prescribed testosterone replacement therapy (TRT) and hormone replacement therapy (HRT). Men who continue to suffer from erectile dysfunction despite properly prescribed TRT or short-acting medications like trimix or Viagra® (etc) experience almost miraculous long-term benefits from the prescription of our proprietary POTENCY™ protocol, which includes the prescription of our POTENTwave™ shockwave therapy for ED protocol.

I have devoted myself to this specialty, because low testosterone and other hormone deficiencies and imbalances, and sexual and erectile dysfunction are such devastating chronic diseases and problems for both men and women, and because they are so underdiagnosed and undertreated, and because successfully treating these diseases can so profoundly enhance health and life, and longevity.

My Story and the Story of Full Potential HRT Clinic

I attended naturopathic medical school at National University of Natural Medicine in Portland, Oregon, where I learned how to safely and effectively integrate conventional medicine with naturopathic medicine in an evidence-informed way that works. I began my career as a physician on the front lines of primary care at Strait Holistic Clinic in Corvallis, Oregon, where I quickly realized that identifying and resolving hormone imbalances and deficiencies treated chronic disease more quickly and effectively than anything else – without side-effects – when prescribed properly.

With that realization, and the desire to practice the safest and most effective medicine possible, I joined a team of highly experienced and wildly successful physicians that were working together at the time at Innovative Men’s Clinic, a group of men’s clinics in the Seattle Metro Area. I learned quickly, and was very successful there, becoming Assistant Medical Director of the medical group, and Clinic Director of their flagship men’s clinic in Bellevue, Washington, where I supervised two other physicians and four medical assistants, and was responsible for more than 3,000 patients.

There was an unfortunate change in ownership, and the new owner of Innovative Men’s Clinic had a very different vision for the clinic. Whereas I wanted to provide the most world-class, state-of-the-art customized, comprehensive testosterone replacement therapy (TRT) and erectile dysfunction therapy, he wanted to take the clinic in a different direction, down the same path as National Male Medical Clinic / Universal Men’s Clinic, which is where he worked before. Look at their Google and Yelp reviews online to see why this was a problem. I refused to work in this setting, and decided to resign.

I don’t have time for recreation. Just kidding. When all is said and done, I’m a family man first. I absolutely love to spend time with my wife Lindsey, and our two children Brianna and Logan. Other than that, I like to have fun like anyone else.

We Have Helped Thousands of Men and Women Just Like You
Don’t Settle for Anything Less Than Our Unrivaled Expertise and Customer Service
Provided by Our Distinguished HRT Experts at Our HRT Clinic
Serving Portland, Oregon, and Seattle, Washington

Are you suffering from sexual or erectile dysfunction? If so, then it’s really important that you see a doctor with expertise and experience prescribing therapies successfully for sexual and erectile dysfunction, such as our POTENCY™ protocol, trimix therapy, and other therapies.

Under the direction and leadership of Dr. Robert Strait, N.D., our team of HRT doctors and staff has helped more than 4,000 men and women in Portland, Oregon, and Seattle, Washington with low testosterone, low human growth hormone, and other low hormones.