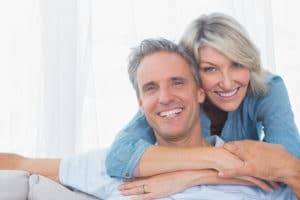 Assuming they’ve already established a strong foundation with a healthy diet and enough good physical activity (which there is no substitute for) in addition to their testosterone or hormone therapy, there is one major thing I often recommend for these patients to further enhance their well-being.

Growth hormone is a key factor with regard to health in general, including preventing aging or aging really well, or even anti-aging so to speak. Growth hormone is called “growth hormone” because it was first identified and studied in the context of its use to literally help us all to grow as in grow from being babies to being adults. However, the name doesn’t capture its primary effect after we’re done growing from babies to adults, which is to essentially regrow us or remodel, also known as regenerate us, on an ongoing basis. In other words, keep us from looking and feeling so old as we get old.

It is supposed to be very abundant in our body when we are younger and are beginning to mature. As with many things however (like for example our sex hormones testosterone and estrogen and progesterone for example) growth hormone release declines significantly with aging. Growth hormone also declines with sleep deprivation, even in in adolescents. So those late night parties in college might have seemed like a great idea, but they really weren’t, when it comes to preventing aging. Growth hormone itself is responsible for a number of processes, included – but not limited to – decreasing body fat, improving sleep quality, increasing cognitive function, quicker recovery post-workout or post-injury, increased strength, increased muscle mass, and more.

With all these benefits growth hormone optimization and even growth hormone replacement has become very popular in the anti-aging community. It usually becomes important for patients to use growth hormone-increasing peptides starting at about the age of 40 years old. It is usually not necessary for any of our patients to consider initiating actual prescription growth hormone medication until they’re 50 or more years old. Of course, everyone’s different. None of us are the average person if you think about it. We’re all very different.

Peptides really just means a protein, but in the context of anti-aging and regenerative medicine when you read “peptides” they’re referring to a chemical messenger, a hormone-like messenger, that your body makes to affect your body, like a hormone affects your body, in other words to accomplish something important. Whereas hormones are made with fats as their main building blocks, peptides are made with protein building blocks as their main building blocks. Your body using the fat or protein-base messengers depending on where the message starts and where it needs to go in the body.

Because the major time of the day when we make growth hormone is while we’re sleeping at night, especially during the first few hours of sleep each night, we will have our patients take their growth hormone-increasing peptides medications right before they lay down to go to bed each night, or usually five out of seven nights of the week. It’s a pain-free subcutaneous injection using a microneedle just below the skin into the fatty tissue in the lower abdomen.

Like most hormone replacement therapies, consistency is also key when it comes to peptides therapies, including growth hormone-increasing peptides. The benefits of the peptides are sometimes felt right away, but often it’s not until 6 – 8 weeks after initiating peptides therapy. Due to the synergistic nature of the body, peptides therapy doesn’t work if someone’s got testosterone or estrogen or thyroid deficiency, so these issues must be resolved prior to initiation of peptides therapy to receive the maximum benefit. The FDA recently stopped allowing pharmacies to compound a large majority of the options for injectable growth hormone-increasing peptides. This was done for no reason as far as safety for patients goes. They were extremely safe, as well as effective. However, there are still very effective injectable options available. We prefer CJC-1295 with or without ipamorelin, or ipamorelin or sermorelin by themselves, and we base our decision on which to go with based on the history, examination, adn blood test results of our patients, as well as on how the medication actually ends up working for the patient.

It is important to note that with any medication, there is no cookie cutter way to dose and there is not an exact timeline on when you will receive full benefit. This highlights the importance of having an experienced physician to manage your care. Poor sourcing, under-dosing, over-dosing, poor dose timing, etc can not only yield no benefit, but can also cause serious adverse effects.

An example of the strength and efficacy of peptides can be demonstrated in the following case study. A 56 year old male who had been on TRT for over 3 years had a boating accident that resulted in a broken tibia. After a consultation he initiated once daily peptide injections. After two months he reported back that his orthopedic surgeon told him he was way ahead of schedule and he was out of his cast one month earlier than expected.

Another 33 year old female patient began TRT a little over a year ago and initiated peptides therapy after she was complaining of poor sleep and delayed onset muscle soreness despite her T levels being optimized. She began a three-month regimen of oral growth hormone-increasing peptides, and in addition to improved sleep, she now competes in fitness competitions. She reported feeling serious benefits after only three weeks on growth hormone-increasing peptides.

With proper diagnosis and treatment of growth hormone insufficiency or deficiency our patients can further optimize their health and prevent aging, and can even anti-age.

We Have Helped Thousands of Men & Women Just Like You

You really have found what you’re looking for. Under the direction and leadership of Dr. Robert Strait, N.D., our team of physicians and staff has helped almost 5,000 men and women with testosterone replacement therapy, hormone replacement therapy, and with other anti-aging and regenerative therapies for erectile dysfunction, other kinds of sexual dysfunction, and so much more. We’ve delivered the results that our patients want thousands of times, over and over and over again. We’re confident that we’ll deliver the results for you too, if you give us the opportunity. We have the expertise and experience to help you to live and perform to your full potential. Give us the opportunity to help you. You deserve it!